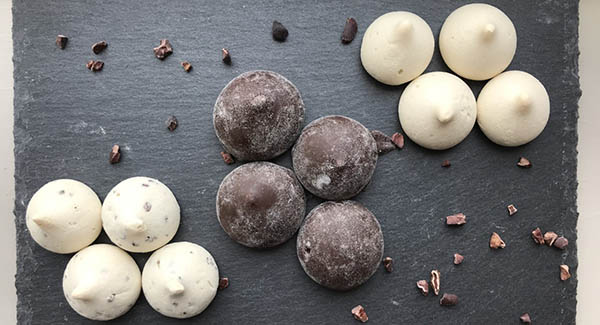 Delicious desserts may not be the first thing that comes to mind when you think of chickpeas, but a team of UW–Madison food science students are whipping up a plan to change that. Recent graduate Emon Ali Khadem led a team of fellow students to compete with a product called Trinipea at the International Food Technology Student Association & MARS Product Development Competition in May. Over 25 university teams submitted proposals to be a part of the event. UW–Madison was one of just six universities selected to compete in the finals, and the Trinipea team was awarded second place.

Trinipea is a shelf-stable vegan meringue cookie that the students developed in vanilla, dark chocolate, and cacao nib flavors. While traditional meringue cookies rely on whipped egg whites to achieve their light, delicate texture, for Trinipea the students turned to aquafaba, the leftover liquid from the chickpea cooking process. Aquafaba has a high protein and carbohydrate content, allowing it to be whipped into a foam just like egg whites.

It took over 56 different trials and recipe adjustments to arrive at the finished product formulation. Early versions were too fragile to ship. With each iteration, the team worked to increase hardness, density, foam stability, and crunch. “The Trinipea meringue is dry but quite aerated, so it melts in your mouth — think Halo Top, but instead of ice cream, a dried sweet treat,” Khadem says.

The innovative dessert idea grew from a place of problem-solving. “Each day Americans eat 2.5 times the daily recommended value of sugar, 40% of the world’s harvested food is wasted, and dessert options don’t necessarily account for dietary restrictions,” explains Khadem, who has just begun a career at PepsiCo in research and development. “We wanted to make something allergen free, low in sugar, and sustainable.” The meringues are sweetened with a specialized Stevia variant that lends a more typical sugar taste with fewer off flavors and bitterness, and a serving of twelve meringues contains only 70 calories.

The idea to use aquafaba to make Trinipea was inspired during one of four field trips integrated into the university’s Food Manufacturing class. During a student tour of a facility that treats dairy waste streams in Richland Center, the chemical engineers stressed the important role of food science innovation in solving food waste issues. “It made us determined to reduce waste by upcycling ingredients from other processes,” says Khadem.

This applied learning is a key factor for members of the food science club at UW–Madison according to Richard Hartel, the club’s faculty advisor. “I have pretty strong opinions about the culture of our students and their commitment to these product development competitions. I think one of the reasons they are successful is that they do this only for themselves— no credits, no grades, no pay. They also encourage everyone to participate. The seniors like Emon and Christie are teaching the freshmen on the team, who in 2-3 years will be leading their own teams. That cycle of training and learning plays a huge role in their success.”

The team also got help from Discovery to Product, a campus program that connects aspiring entrepreneurs with experienced commercialization and innovation specialists who are veteran business developers, entrepreneurs, product managers, and start-up executives.

While the Trinipea team is not planning to introduce the product to the marketplace themselves, they are optimistic that something like it will appear on shelves within the next couple of years. It’s not uncommon for food companies to turn some of the student-developed concepts presented during the IFTSA & MARS Product Development Competition into new commercial products.

Either way, Khadem sees clear applications from the Trinipea journey. “Trinipea was a unique opportunity for our entire team to be able to see innovation and idea-making out of sustainable waste streams firsthand. We have students working at Diageo, Kerry Ingredients, PepsiCo/Frito-Lay, MARS Wrigley, Tribe9 Foods, General Mills, GoodFoods and so many other large consumer packaged companies, and we all want to positively impact the environment. Everyone needs to eat and there’s always demand for new novelty and innovation!”