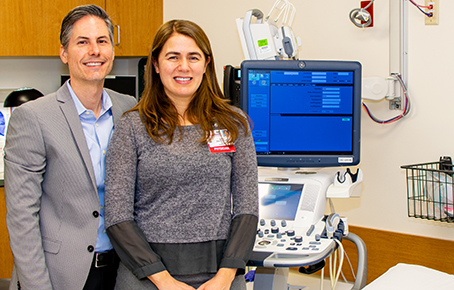 The Wisconsin Alumni Research Foundation’s Innovation Day is an annual celebration of campus inventors. The day brings together industry innovators, researchers, investors, students and the public for a one-of-a-kind technological showcase. Alumni, investors, innovators, and the public can attend to get an inside look at the products, services, and technologies that will shape the future of our world.

Death and injury to patients under conscious sedation can be prevented. Two physicians strive to balance life and work – and sleepless nights – to bring peace of mind to families.

It is a few days before Christmas Eve. That Dr. Guelay Bilen-Rosas has found time to be interviewed is a small miracle in itself.

A pediatric anesthesiologist at UW Health, she is preparing for an upcoming 20-hour operation. Her patients, she admits, are never far from her mind.

Still, Dr. Bilen-Rosas is gracious and eager to talk about a remarkable technology that has been her waking dream for the last several years.

Guelay is joined by her co-inventor and husband, Dr. Humberto (Tito) Rosas, a radiologist. Together they describe a truly nightmarish scenario:

Imagine a loved one is undergoing surgery, or even a seemingly routine procedure such as a colonoscopy or dental extraction. He or she is administered a potent intravenous anesthetic. At some point, alarms begin to wail. The patient stopped breathing three minutes ago.

When this happens to celebrities – Joan Rivers and Michael Jackson died under sedation – it makes news. Yet respiratory compromise occurs more often than you might think, Tito says. An estimated several hundred deaths a year, in fact.

And the risk has only intensified as more and more procedures are moved to outpatient settings absent a trained anesthesiologist on-site.

The monitors used today don’t measure airflow directly but rather ‘surrogate’ factors like pulse oximetry, says Guelay, which have a lag time of several minutes and may impart a false sense of security. Even if intervention is timely and the patient survives, comorbidities such as brain damage and stroke can have profound consequences for quality of life.

“By the time the monitors go off, usually the patient’s oxygenation level is so low that we’ve already missed a several-minute window when we could have been treating,” says Tito.

An entirely new kind of monitor is needed. A monitor that can detect airway compromise early, quantitatively and in real time. To answer this challenge, the Rosas are developing a probe that employs ultrasound signaling to measure and predict airflow across the wind pipe.

“We envision this could be used in almost every clinic around the country,” Guelay says. “This will save lives.”

Anywhere a pulse oximeter is required, the new device could one day complement it.

That vision may be a few years away. But with support from WARF Accelerator, the Rosas have gathered critical data, expanded their team, and are now closing in on their next major milestone – a hands-free, miniaturized prototype that they can test in the operating room.

“This project started out as a little family business,” says Guelay. “But in life, great things don’t happen with just one person. It takes a village.”

The addition of medical physicist Quinton Guerrero and Irene Ong, a computer scientist, is pushing the project to the next level. By leveraging machine learning, the team believes that their fully automated device will provide a level of detection superior to even the best-trained human eyes.

For the Rosas, WARF has served as a valuable partner through their entrepreneurial journey.

“WARF has been a wonderful resource that many places don’t have,” says Tito. “We’re fortunate to have it here in Wisconsin. If you are a physician and don’t have an MBA and don’t know how to navigate those waters, there are people who can help you through that entire process.”

He adds, “This is the first project I have ever really started on which I knew was bigger than me. Maybe it wasn’t 100 percent achievable when we started. But we had this dream.

“If you ask me what I have learned, I learned to dream a little bigger.”

Of course, challenges both technical and personal loom large. The Rosas acknowledge that it is difficult at times to juggle their three hats: physician, entrepreneur, parent. Sometimes that means working until 2 a.m., only to rise again at 6.

Where do they draw inspiration? From each other, and from a sense of responsibility larger than life.

“When you see a child go from perfectly healthy to almost at the verge, and you know a mother or father is waiting on the other side, and you pledged to bring their baby back, there are a lot of emotions,” says Guelay.